OK K.O.! Wiki
Register
Don't have an account?
Sign In
Advertisement
in: A to Z, Episodes, Season 1, Season 1A

You Have to Care

You Have to Care

When an old friend of Enid's comes to town, she gets the opportunity to right an ancient wrong.[1]

K.O. and Rad are playing around as they kick a box around. When Rad passes it over to Enid, who's lying on the counter, she lets it fall to the side. Rad is upset that Enid ruined an opportunity to break their last record. K.O. asks why Enid is so depressed, but she brushes him off. Cheers erupt outside of the store and a pink limo tank drives into the Plaza. It is soon revealed that the rider is Elodie, a famous hero who attends the prestigious P.O.I.N.T Prep Academy. Many of the Plaza's patrons cheer and applaud at Elodie. When Elodie enters the store, K.O. and Rad are excited to see her, and she poses with them for a selfie. Upon checking the photo, Elodie sees Enid in the background, and greets her, creating some condescending small talk.

Elodie is carried off by fans and K.O. and Rad are shocked that Enid knows her. Enid becomes annoyed and goes on her break. K.O. is curious about Enid and Elodie's relationship. Rad tries to ask Enid straight up, only to be beaten into a wall. K.O. decides to talk to Elodie, who is busy talking to fans. When K.O. asks if she knows Enid and why she might be upset, Elodie suggests K.O. ask Enid himself. Enid is furious when K.O. tries to talks to her, and leaves. As Enid walks through the Plaza she encounters fan after fan, who turn into Elodie, enraging her. She thinks she's seeing Elodie herself and is about to punch her before she realizes it's K.O. Enid backs up and trips on a poster of Elodie. K.O. tells Enid it's okay to talk about problems, even if it's just to yourself, which launches into a flashback.

In the flashback, a younger Enid is seen practicing her ninjustu alone. Elodie comes on screen and compliments her moves, startling Enid. Enid seems to be a big fan of Elodie, who comments that she might have seen Enid around the school halls. She compliments Enid again, who interprets it as sarcasm, but Elodie insists and pretends to do some of her moves. Enid offers to practice with her, and a montage of Enid and Elodie hanging out plays. One night they see a flyer for the P.O.I.N.T. Academy tryouts, and both girls are interested in entering (Enid to become a hero, and Elodie to become popular).

Enid suggests they enter as best friends, offering Elodie half of a pair of a heart necklace. She agrees, as both girls never had a best friend before, and they go off to the competition. The girls compete together, passing each challenge easily, until it's the final showdown, and they have to fight each other. Initially, they're equally matched, but Enid gains the upper hand. Just as she's about to land the final blow, Enid stops, saying she can't fight her best friend. Elodie shoots Enid in the back, and overpowers her, winning the match. As Elodie climbs into her winning trophy, Enid attempts to congratulate her, but Elodie says they were never friends; she only befriended Enid to learn how to counter them. Enid is in shock, but Elodie is carried off in her giant trophy.

Back in the present, Enid tearfully tells K.O. that Elodie's betrayal taught her that she should never care to avoid disappointment. K.O. asks her if it's worth not caring if it stops her from trying and seeing things through. Elsewhere, Elodie has been fighting heroes in the Plaza and beating them easily. She asks for a final challenge when Enid volunteers. Elodie scoffs, telling Enid that she's far from challenging, and asks if Enid even cares about fighting. Enid quotes a "really smart friend" and says that real failure is not caring and pretending not to care is dumb.

They begin to fight, and both seem equally matched. Elodie mocks Enid and asks if she ever learned any new moves, and Enid demonstrates by turning to a block of wood. Shrouded in smoke, Elodie tells Enid to come out of hiding, and Enid appears, turning into several copies of herself. Elodie shoots down several of them, who all into blocks of wood. With only two left, Elodie asks if Enid could really fight her best friend. Elodie looks between the final two copies, and aims for one, but shoots the other. It turns into a block of wood, and while she's shocked, Enid admits she can't, and strikes Elodie down.

Fans rush to Elodie's side, booing Enid when her pink limo tank arrives to take her home. Elodie jumps in and the tank drives off. K.O. asks if the two girls were best friends, and Enid says Elodie only befriended her to learn her moves. K.O. asks if Elodie knew about the contest before Enid, and Enid realizes they both found out at the same time after they became friends. K.O. asks if Enid still hates her, to which she replies no. Enid calls K.O. a good friend, and Rad slides in to agree, earning a kick into the air by Enid. As Rad falls, K.O. continues the new game and kicks Rad back into the air. Elodie sits in the tank, misty-eyed and clutching her necklace when Geoffrey asks how the visit to her childhood friend went; she tells him to shut up. 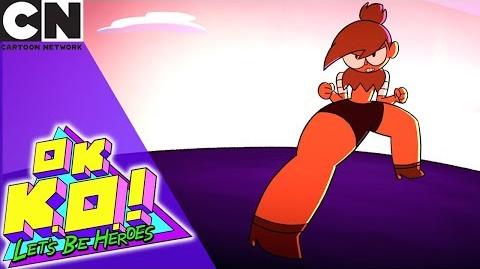