K.O. sets out to prove to Enid that being helpful is rewarding by helping people all around the Lakewood Plaza Turbo.[1]

K.O. stares at the Bodega for his first day in the job, he gets hyped up but then realizes he has to focus on helping, in which when he does an intense pose, he punches Joe Cuppa in the stomach by accident. Really hard.

Inside the Bodega, lots of customers are in line at the counter with Enid looking annoyed. When all the customers try to get her to help them, she instead closes the lane. With everyone gone, the only one left is K.O., reporting for duty! Enid gives him his first order, which is to clean the Bodega. K.O. equips tons of cleaning tools and starts to clean, while Enid turns into a log when asked if the customer could pay with thousands of pennies. When K.O. is done, Enid gives another task to K.O. which is to sort through a penny dish. When Enid tells him he loves helping people, K.O. states that "it's his job". When he asks if anyone else is like him, she replies with "Too much work, too little payoff.", in which K.O. then decides to try to help Enid to think that helping people is good. She replies with "You'll never melt my icy heart."

K.O. tries to find people in need of help, in which he finds Joff and Nick arguing about how to open a jar of pickles since they want to do it in different ways. K.O. recommends that Joff opens it his way first, then Nick can do it his way. Joff opens the lid, while Nick blows up the lid (and the jar and their clothes.) and gets his pickles. After finishing, K.O. hears another cry for help, so he runs off to the hair salon.

He finds Mr. Logic on the floors in which he explains he messed up a haircut requested by the customer by 20%. K.O. then tells him to give her another haircut, while he cleans hair off the floor then puts it under Mr. Logic. The haircut is successful and the customer thanks K.O., in which K.O. replies with a megaphone so Enid can hear. He then hears another cry for help, and he goes over to the frame store.

He then finds A Real Magic Skeleton and Brandon arguing, since Brandon won't stop drumming and it's distracting ARMS. K.O. asks if they need any... HELP? In which Brandon replies with "This isn't the bodega, man.", and keeps drumming. ARMS complains that he needs to get a baseball in a display case but Brandon is distracting him, which gives K.O. the idea to put a giant display case around Brandon so he can't be heard. ARMS thanks K.O., and K.O. leaves to search for more distress calls.

K.O. eventually walks towards Red Action's crew, and asks them if they need any help. Red Action questions why he is helping them, with K.O. explaining that he's a helper. Red Actions decides to tell him to keep walking backward, into a hole, with lava filling the hole a few seconds later. Red Action posts him on social media, and Enid sees it along with K.O. and his back burned, leaving his underwear visible. When Enid asks what he was doing, he says that he was helping them and that they were laughing with him. Enid explains to him that it isn't true, and K.O. asks her why she knows what happened. Enid shows K.O. her social media page (with her getting flustered when he asks "You know her?") and Enid explaining that she's a wild person. While browsing through her photos, K.O. asks Enid why she's like this and explains that it's probably because she got a bad haircut the other day. K.O. then realizes that the reason why Red Action's crew is mean, since she wants to take out her anger on other people, so K.O. asks Enid to show him more pictures of her crew.

He goes back to the teens and says he's going to help them more (which they laugh at). Red Action gets pointed out by K.O. to fix her horrible hairstyle and he brings her to Mr. Logic to cut her hair, which is perfect and she loves. He then helps Drupe and explains that her taste in fashion was good. She says no one reads it, but then Joff and Nick enter, explaining that their clothes were gone so they took her advice and they loved the new clothes. K.O. then helps Gregg with their self-esteem issues, by framing their Valedictorian certificate in the frame store (where Brandon is "all drummed out").

Red Action then says to K.O. that he's too weird with his helping, and they all leave. K.O. goes back to the bodega and he explains to Enid that he helped people with her thinking, but then Gregg comes into the Bodega and thanks K.O. Enid then says that helping seems a little rewarding, and K.O. and Enid starts to laugh. 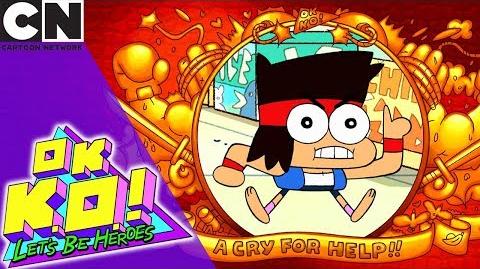