OK K.O.! Wiki
Register
Don't have an account?
Sign In
Advertisement
in: A to Z, Crossover episodes, Episodes,
and 2 more

The Power Is Yours!

The Power Is Yours!

A special hero helps Lakewood Plaza Turbo save the planet.[1]

A frustrated Lord Boxman yells at someone for their disgraceful work performance, only to reveal the person being scolded is himself in the mirror.

Boxman's desk telecom is buzzed by Ernesto informing him that an "efficiency expert" has arrived. Boxman tells Ernesto to send them in.

With Boxman facing toward the window, pink smog fills the room, and to Boxman's surprise when he turns his chair around the person making it is a hot middle-aged woman in a skin-tight jumpsuit with blonde hair draped across one of her eyes.

She introduces herself as Dr. Blight, and with her artificial intelligence companion MAL, she sells the lovestruck Boxman the idea that by polluting the planet, Boxman can make a ton of money by destroying the world. Boxman interrupts asking why she wants to destroy the world when they both live in the world. Dr. Blight reiterates her justification for doing it because "No one believes that climate change is real!"

Blight then activates the touch screen button on MAL and a giant aerosol can pop out of the Boxmore factory ceiling. Blight laughs maniacally while stating that her "O-zone Killer" requires the burning of garbage and logs to produce smog that will cover the whole planet in smoke. Boxman joins in the laughter as do the Boxmore robot children when they enter the room.

As the earth is covered in smog, ice caps melt, the temperature rises, and Plaza parking lot begins to flood.

Meanwhile in Gar's Bodega, K.O. notices the smog entering the store and tries to get Rad and Enid to pay attention to it, to which the teen employees think nothing of it, even as K.O. points out that it feels like summer where it should be winter.

Rad and Enid then go outside stating they are going to take advantage of the new lake where the Lakewood Plaza parking lot should be.

Floored by Rad and Enid's nonchalant attitude and shocked by the trash littering the parking lot, K.O. asks if there is anyone who could help.

Just when the four are about to let their powers combine, Brandon and A Real Magic Skeleton notice that Kwame is giving out power rings and want one too. But Kwame says he only has one ring left, the ring with the power of Wind. With no time to choose who gets it, he decides to tell them they should share it.

K.O. pulls out a Pow Card with Captain Planet who has a power level of Planet.

Captain Planet then flies over to Boxmore where he tells Dr. Blight it has been a while since they last battled. He then sucks up all the smog around the Boxmore factory into a sludge ball and caps the factory smokestacks disabling the smog temporarily, then slings some sludge at her.

But Boxman is still up and he uses Darrell, Raymond, and Shannon, who he has transformed into a carbon laser cannon which weakens the Captain that he falls apart back into the rings.

This causes the Plaza Planeteers to fight among themselves and Kwame to panic, recalling how it was the same discord that caused the original Planeteers to break up and get regular jobs.

K.O. uses the power of Heart to bring everyone back to their senses.

Before they attempt another try at taking down Blight and Boxman, they go into a montage where they clean up the plaza, diverting the water from the parking lot into the dry ditch in the back, picking up trash, and--in a sappy manner--installing solar panels on the roof of Gar's.

After the montage, they re-summon Captain Planet who is reinvigorated by their small efforts to help the environment and defeats Boxman blowing up his factory right about when Boxman tries to touch Blight's hand.

Back at the Plaza, K.O. thanks Captain Planet for defeating Boxman and is eager to see the Captain save the rest of the world. That's when the Captain breaks the bad news to K.O., and subsequently the audience, about how he, Kwame, and the other Planeteers tried doing that years ago only to result in fruitless victory, mirroring that in real life things didn't get better like they had hoped because the effects of climate change became irreversible. 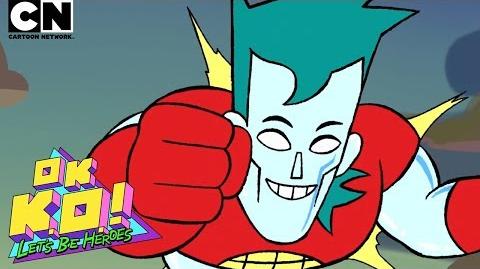 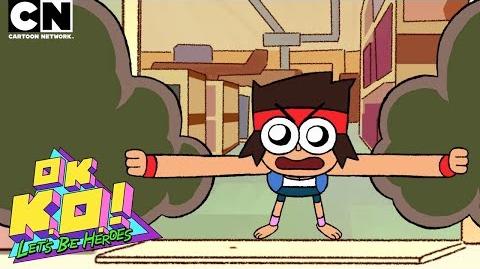 OK K.O.! The Power Is Yours Cartoon Network 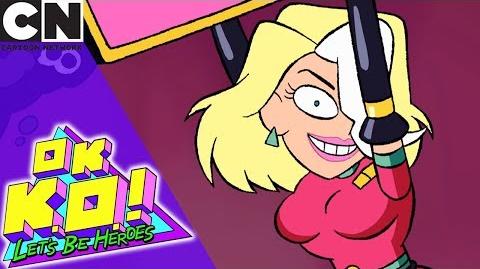