OK K.O.! Wiki
Register
Don't have an account?
Sign In
Advertisement
in: A to Z, Episodes, Multi-part episodes,
and 2 more

Searching for power, K.O. accepts the help of a mysterious figure. Our heroes band together to save the plaza from a new menace.[1]

A flashback of Carol and a young K.O. is shown, they are sitting near a pond and meditating. He has trouble doing this, as he is distracted by a fly. Carol instructs K.O. to focus. The episode cuts back to the present K.O., who is facing off against a Darrell. K.O. attempts to perform a power fist, but is unable to. He is saved by Radicles and Enid, who then proceed to fight Darrell and leave K.O. behind to keep him safe. After the battle is finished, Mr. Gar congratulates Rad and Enid. To K.O., he says 'Good hustle', as K.O. did not participate.

K.O. immediately deflates upon hearing this. K.O is tasked by Gar to clean up the debris from the battle. As K.O. sweeps, he thinks about the things Rad, Enid, and Mr. Gar told him. K.O. is angry that he is not able to fight yet, and that Rad, Enid, and Mr. Gar treat him like a child. In anger, he throws his broom, which is caught by a shadowed figure standing in the nearby woods. The figure offers K.O. a way to have power. K.O. accepts, and walks with him into the forest. In a moment of hesitation, K.O. asks who the mysterious man is. The man produces a POW card that reveals his name to be Shadowy Figure and his power level to be 8.

They walk to a lake together. There, the mysterious man explains that K.O.'s true source of power is his anger. The shadowy figure tells K.O to close his eyes and focus on all insults Mr. Gar, Rad, and Enid had told him. As K.O. does this, blue energy begins to build around his hands. However, the energy dissipates quickly. This causes K.O. to have a tantrum. As K.O. gets more and more enraged, the wind starts to blow, and purple energy emerges from his hands. This new energy shoots into the air and forms a pair of fists. Shadowy Figure is visibly pleased. K.O's eyes glow purple, and he transforms into T.K.O, a dark variant of K.O.

Back at the plaza, Enid and Rad are confronted with another Darrell, who grows several times larger than the plaza. This larger Darrell has a cannon on his chest that would destroy the plaza as soon as it completed charging. However, the cannon does not reach that point, as it is sliced in half. As Darrell's pieces fall to the ground, it is revealed that T.K.O. was Darrell's destroyer. Rad and Enid are amazed at his newfound skill.

The episode next cuts to what is presumably the next day, as Carol drives T.K.O. to work. T.K.O. is silent and sullen and ignores his mother's words of support. At work, Enid and Rad are curious about what they think is a phase of K.O.'s. Rad and Enid attempt to cheer him up, and Enid calls T.K.O. cute. This makes T.K.O angry, and he challenges Rad and Enid to a power battle. T.K.O punches Rad into orbit. Enid manages to keep her own in battle with T.K.O., until she can reach Carol's dojo.

Carol and Mr. Gar come out of their respective businesses to speak to T.K.O. Carol orders Gar to give T.K.O. compliments. In doing so, Mr. Gar confesses that he loves Carol. T.K.O. is enraged by Gar's halfhearted compliments, and proceeds to create a bubble of purple energy that knocks down everyone in its path. Just as T.K.O. is about to kill Carol, he is stopped by K.O. inside his mind.

K.O. and T.K.O. have a battle inside of the mind, and K.O. locks T.K.O. inside his mind once more. K.O. awakens and apologizes profusely for his actions, though he doesn't seem to remember what they are. Rad asks K.O. where he learned his new powers, and K.O. shows them the Mysterious Figure's POW card. The card glitches in Carol's hand to reveal that it is actually a -8. Carol admonishes K.O. for following a stranger into the woods.

Shadowy Figure standing on top of a building and saying "Soon." before he vanishes. 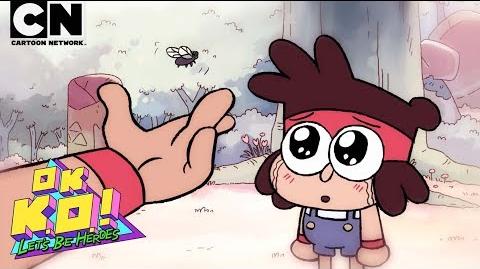 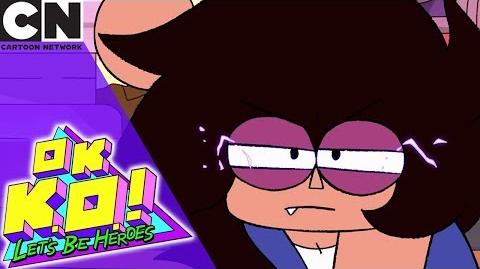