OK K.O.! Wiki
Register
Don't have an account?
Sign In
Advertisement
in: A to Z, Episodes, Season 2, Season 2A

"Seasons Change" is the 1st episode of Season 2 of OK K.O.! Let's Be Heroes, the 53rd episode overall, and the season two premiere.

When our heroes return from time off, K.O. is horrified to discover that things have changed.[1]

Rad rides in his van to the Bodega in the Fall season. Everyone there was shocked by Rad's changes, which hasn't been revealed yet. But when he comes in the Bodega, it is revealed that he has a really different look. He is now orange and wearing different clothing.

Rad then asks Enid about her summer and she is now a mime. She tried telling Rad about her summer in mime, but he doesn't understand her. Then Enid speaks, saying her summer was great as she grew as a person. Rad then wonders how K.O. has changed. But when K.O. enters the Bodega, he appears to be the same. Enid and Rad are very shocked about this, but K.O. is more shocked by their transformation.

K.O. wonders what's going on, and Rad and Enid tell K.O. they went through a "Time Skip." K.O. doesn't understand. Rad then explains a Time Skip, saying him and Enid used to be like "Pathetic little Caterpillars", but during the summertime, they grew in a new form. They have now transformed into "Rad and Enid 2.0." Enid then says there's no going back after a time skip while Rad scratches himself. K.O. is dissatisfied with Enid and Rad's time skip, saying Enid went from a "super cool ninja to a clown," and that Rad went from a "Super strong alien to a tangerine man." Both of them feel insulted after hearing those words. Rad then tells K.O. that he went to an "intense and challenging journey".

Rad tells his story about his transformation in a flashback. He and his parents were going on a cruise. Rad is having fun on a water slide until he sees a tangerine family playing volleyball with another tangerine family. Fascinated and inspired, he goes to his parents to find Tanning Oil, but he then picks up Orange Rind, which is not for the use of skin. He then puts some on him and gets a tan, which was supposed to be "intense training."

For days, he has gotten a tan and has gone tangerine. He then tries out new clothing and hangs out with the tangerine family. The flashback then ends. K.O. still likes the old Rad. Rad then tells K.O. he's the only one who thinks that. K.O. then reveals that he hasn't done anything different during his summer, and questions why Enid turned into a clown. Enid then tells K.O. she's not a clown and she studied the art of "genjutsu."

In another flashback, Enid tells her story about her transforming into a mime. She went to a school finding a genjutsu class, as she was supposed to be assigned in, but she actually went to a Mime 101 class. She says her teacher was the most impressive teacher ever, saying he taught them many techniques.

She was really bad at these challenges. But as time goes on, she actually started to improve her mime skills. At her final exam day, she was passing every course, until she goes to the last part, giving the teacher hot coffee without spilling it on him. And she passed that part, the teacher then gives Enid a beret. And the flashback also ends. K.O. thinks their time skips are unnecessary, Rad clearly disagrees with that. And then, a new foe comes to the bodega.

K.O. and the newly formed Enid and Rad goes outside to prepare for the fight, but it appears Boxmore's robots hasn't arrived, because Enid and Rad say everything changes and that they don't fight Boxmore's robots anymore. But the enemy appears to be Big Bull Demon. K.O. is then accepting the fact that everything has changed. Big Bull Demon then attacks him. Rad is trying to use his strategies on Big Bull Demon, but he then shrivels up because of the Orange Rind. Enid then uses her mime skills to help Rad, but that doesn't work. Enid then tells BBD to stop, but he uses his drill to defeat them. K.O. then tells them to turn back, and Rad and Enid actually agree with him and talk about how much they messed up. They then turn back into their old selves again, using their old strategies on BBD, and Big Bull Demon then gets defeated. K.O. wonders if everything is back to normal, and Rad said yes. He then asks K.O. about his summer, K.O. then says it's like every summer with his mom.

Another flashback begins, seeing K.O. doing regular summer things with his mom, like watching movies, be at the beach, etc. But while those are happening, it appears Mr. Gar is actually hanging out with Carol. The flashback then ends. K.O. then says nothing changed about him. Enid and Rad have noticed Mr. Gar was in the flashback and tells K.O. that he did have a pretty big change in his life, and K.O. is not getting it. Carol then enters and then kisses Mr. Gar, revealing that they have been dating. K.O. then says he did have a pretty great time skip after all. 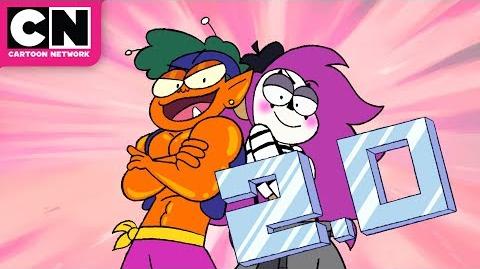 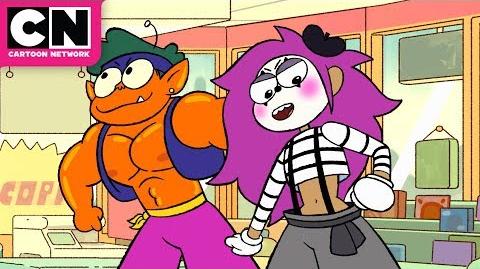