Season 3 is the third season of OK K.O.! Let's Be Heroes and officially announced by Animation Magazine on June 26, 2019. Season 3 immediately aired on July 7, 2019, a week after the season 2 finale "Dark Plaza" aired on TV.[1] Production started from summer 2018 and ended on August 2019. On August 6, 2019, in an interview with Den of Geek!, Ian Jones-Quartey has stated that this season is the final season and the series finale aired in 2019.[2] The series finale aired on Friday, September 6, 2019. There are a total of twenty episodes.

New episodes for the third season began airing at the same schedule like the second half of season two, airing on Sundays at 4:30 pm up onto August 25, 2019. The first six episodes of the season premiered on July 5, 2019 on the Cartoon Network app and Hulu with Live TV. On July 19, 2019, it was announced from San Diego Comic-Con that Sonic the Hedgehog and Tails will crossover with the show in the episode "Let's Meet Sonic" that will air on Cartoon Network on Sunday, August 4 at 4:45 pm.[3] It was confirmed later that "Let's Meet Sonic" will not air on the app, but on TV first instead. On July 26, 2019, five episodes aired on the app and Hulu with Live TV. On August 16, 2019, five episodes aired on the app and Hulu with Live TV, it is the last batch of episodes streamed online before TV. After the broadcasting of "Red Action 3: Grudgement Day" and "Carl", the final three episodes: "Dendy's Video Channel", "Let's Fight to the End", and "Thank You for Watching the Show" are advertised as a one hour special event that were broadcasted on the network on Friday, September 6, 2019 at 7 pm.

In this videogame inspired world, K.O. works at Gar's Bodega, a one-stop shop for all your hero needs. Whether he’s mopping the floor with Lord Boxman's evil robots or literally mopping the floor, K.O. tackles everything with enthusiasm. 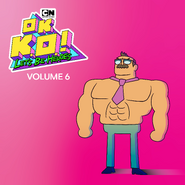 According to Ian Jones-Quartey and Toby Jones from the What A Cartoon! podcast, before Cartoon Network announced that Season 3 was their final season and that it was twenty episodes long, they had twenty episodes outlined and approved to be fully written and boarded as "Season 3A". It was revealed that the last episode they had outlined before they got the news was "Big Reveal" which was originally planned to be a half-hour episode that would have served for the 19th and 20th episode of Season 3. With the lowered episode count, they had to remove at least five to ten one-off episodes to have the final season focused on the story-driven and selected "fun" episodes. They were expected to have the third season to be 40 episodes long which would have the show totaling 132 episodes, with "Season 3A" and "Season 3B". In an interview with The Creative Talent Network, Ian Jones-Quartey noted that the series executive Conrad Montgomery notified him before Season 3's production was ready about the news to craft a series finale since other shows got canceled on short notice.