OK K.O.! Wiki
Register
Don't have an account?
Sign In
Advertisement
in: A to Z, Characters, Robots,
and 8 more

Larissa Gallagher (Thank You for Watching the Show)

"Thank You for Watching the Show" (series)

Sara is a robot created by Lord Boxman in OK K.O.! Lakewood Plaza Turbo. She later appeared in the the television show OK K.O.! Let's Be Heroes series finale "Thank You for Watching the Show" at the end of the episode, attacking the plaza alongside Robbie instead of other Boxmore bots, such as Darrell or Shannon.

Sara’s are yellow and take on an orb shape that looks slightly like Shannon's head. They have one eye, similar to Ernesto'sand Darrell's, and a red siren attached to the tops of their heads. They don't have any physical bodies.

In “Thank You for Watching the Show“ she is used as ammo by Robbie and shot out, blowing up upon impact. And described by Ian Jones-Quartey as a team with Robbie[1] and thus is most likely with him 24/7.

She will pop out of the ground and can be picked up and thrown at enemies using the grab ability. Like a bomb, she will explode when hit or if she's close enough to the player. The attack varies based on the version of Sara. The regular and prototype variants behave the same, but the MK II version will detonate faster making them more of a threat. 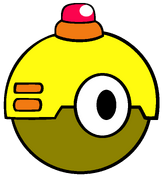 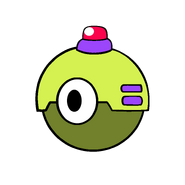 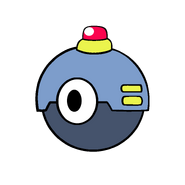