A battle between Raymond, Darrell, Shannon, K.O., Rad, and Enid happens in the late rainy night. In an instant, lightning strikes at Shannon causing an error in her schedule, making her fall in love with Rad. When Raymond almost hits him, she saves him, and he falls in love with her too.

But his friends and her brothers separate them from each other and take them back to their respective places.

Inside the factory and in the store, the two always remember what they feel for each other.

Darrell and Raymond remind Shannon that she can forget what she feels for Rad by provoking self-destruction, which she denies to do because she does not want to forget him.

At night when no one saw the two, they meet and promise to leave the next day, because it would be the only way.

Darrell and Raymond observe everything and create a plan to end their love for each other: Kill Rad.

The next day, when he takes his van to the factory side to pick her up, he sees a shadow like hers and happy, walks over to see it was an ambush of Darrell and Raymond.

When they knocked him out, Shannon appeared with her suitcases and stopped them from doing it self-destructing, going behind the factory, she committed suicide, one of her arms to Rad's lap that mourns her death.

When Enid and K.O. went to open the store, they perceive his cry.

His friends console him and he says that the Boxman robots are only minions of him and that they could not love, so he throws Shannon's arm violently against the ground.

Behind the factory, one realizes that she had self-destructed another Shannon and planned to run away with him yet, but when she saw him throwing her arm on the ground as if it meant nothing to him more, she actually self-destructs.

Raymond and Darrell watch another Shannon emerge after it has been self-destructed. Darrell asks if she still loved Rad, she says she did not love him anymore and wanted to destroy all the heroes of Lakewood Turbo Plaza.

They meet again and Rad says she would not fight Shannon, but she attacks him and he plucks her head off by defense. Curtains closed with him holding her head and declaiming (a reference to a scene of Shakespeare's play, Hamlet "to be or not to be, that is the question). 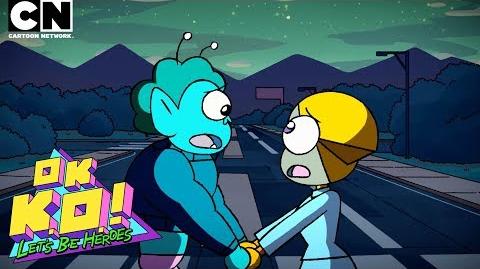 Retrieved from "https://ok-ko.fandom.com/wiki/Rad_Likes_Robots?oldid=145757"
Community content is available under CC-BY-SA unless otherwise noted.