OK K.O.! Wiki
Register
Don't have an account?
Sign In
Advertisement
in: A to Z, Characters, Villains,
and 5 more

"Boxmore Infomercial" (shorts)
"I Am Dendy" (as Pow Card only),
"We're Captured" (series)

Professor Venomous is a supervillain who serves as a major antagonist of OK K.O.! Let's Be Heroes. He made his debut in the episode "We're Captured".

He is presented as one of Lord Boxman's clients. He has an organic minion by the name of Fink. In "Big Reveal", it's explained that he was formerly known as the P.O.I.N.T. member Laserblast. He is also revealed to be K.O.'s biological father. In "Let's Get Shadowy", it's revealed that he is also the other side of Shadowy Figure.

Professor Venomous is tall with a slender body and lilac skin (due to an experiment trying to get his powers back). He has black, spiky, slicked-back hair, a thin mouth with thin eyebrows, and dark purple eyelids. His nose is pointed and has dots representing stubble along his chin and lower jaw. His attire consists of a white coat with matching boots, a navy blue turtleneck underneath his coat, and black pants

During the time skip in "Thank You for Watching the Show" he wears a gold wedding ring, revealing he had married Lord Boxman.

Professor Venomous is typically calm and indifferent in his interactions. However, he has a more vicious side beneath his cool exterior that he expresses during interactions such as fights with heroes. He has also repeatedly expressed his admiration towards Boxman's dedication to destroying the plaza.

He has been shown to have a softer side to his personality and treats his minion Fink with great care and kindness, even going as far as to act as a parental figure to the young villain. Nevertheless, as in "K.O. vs. Fink", he begins to neglect her emotional needs due to a heavy and burdensome workload in addition to Shadowy's interference earlier in the episode, and fails to realize that his material compensation can’t satisfy her.

The villain has shown to have the sentiments of a thrill-seeker. He has expressed boredom with the mundane course of his day to day life. He becomes exhilarated when becoming personally involved in attacking heroes. When he, Boxman, and Fink rode in the destructive vehicle Boxman built for Fink to attack the plaza, the situation ended in misadventure. Still though, Professor Venomous stated he likes being blown up and getting his hands dirty. The elation inspired him to buy back Boxmore from the Board Of Investors to give back to Boxman so more adventures in villainy can be had. Whether he fails or succeeds, Professor Venomous loves the experience of fighting heroes. His affinity for the villain lifestyle is so strong, he and Fink destroyed a planet given to him to conquer, later returning to Earth to finish what they started.

Despite his villainous endeavors, he had made great strides to bond with his son, K.O., even attempting to help him defeat Shadowy Figure, before finding out they were the same person. Despite his efforts to bond with his son, his other self, as well as his fused persona don't really seem to care about K.O.'s feelings, as they used Carl's rampage to force K.O. to unleash T.K.O..

After returning to his normal self, he is shown to be ashamed of his actions, as seen when he shows up to Boxman's house with a cake and apologizes. During the timeskip, Venomous (now married to Boxman) is seen being proud of Fink and her career as a professional gamer. His current relationship with K.O. is left unknown, as they are no longer seen interacting much after he regained control of his body.

Click here to view the history of Professor Venomous. 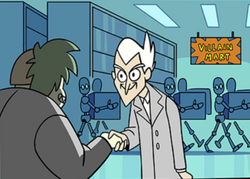