OK K.O.! Wiki
Register
Don't have an account?
Sign In
Advertisement
in: A to Z, Episodes, Shorts,
and 2 more

K.O. examines the consistency of water from the mop. K.O. mops up the floor and after he finishes it, he reads a book on how to become a hero. Enid walks to K.O. while eating nachos to compliment how the floor is clean, despite her making a mess. K.O. believes that his job is paying off and mops again. A shadow surface on K.O. and K.O. crashes through the can display, which was the figure behind him. When K.O. continues with his inner monologue, Rad is sleeping in a box and wakes up.

K.O. picks up the cans and stacks them back. However, the Can Wizard pops out of the can display. K.O. confuses the Can Wizard with the Great Sage from his book which makes him excited to get to talk to "him." The Can Wizard approaches K.O. but slips on a can. When he says he needs "help", it caught K.O.'s attention and K.O. prepares to save him. The Can Wizard rolls into K.O. and both of them crash into a pile of TNT.

First, Rad retells the story that a thief sneaked into the Bodega to sell a giant bag of money from the shelf. When the thief attempts to sneak, he bumps into Rad. Rad proceeds to punch him. Dynamite Watkins was amused by his retelling until Enid decides to tell her perspective. Enid was hiding behind the shelves when she noticed the thief. She set up a ninja shadow trap which traps the thief and sees Rad. Rad punched the thief ending Enid's story. Dynamite Watkins was also impressed by her story. Enid and Rad briefly argue over who should take credit.

"The Life of Darrell"

Ernesto sets up the camera to record Lord Boxman. Lord Boxman welcomes the viewers to show where the robots of Boxmore were produced. A Darrell pops out from a machine and Lord Boxman commands Darrell to destroy the Bodegamen. Darrell goes inside the Bodegamen to be defeated immediately and combusted. A second Darrell is produced and Lord Boxman gets tired of Darrell interrupting him.

Lord Boxman is angry and throws multiple controls on the ground. They all had buttons pressed and more Darrells approached to Lord Boxman. Another giant Darrell pops out signaling the end of the video recording.

"Where In The World Is Mr. Gar"

Rad calls K.O. to run and he throws a can at K.O. to catch. However, the can goes through K.O.'s hair and smashes through one of Mr. Gar's display stands. Enid calls Mr. Gar and Mr. Gar tells them he is on a top-secret mission. K.O. apologizes to Mr. Gar for wrecking his display. Mr. Gar says that he has multiple displays on the back and can be replaced. He tells them to clean up the mess. The Bodegamen ponders where Mr. Gar is and what missions he does.

Mr. Gar had enough of the Bodegamen and steps out from his mission. K.O. notices that Mr. Gar was playing Duck Stack!, which was his mission. Mr. Gar is mad that he lost his last life from the game. The Bodegamen is amazed that he plays Duck Stack! Mr. Gar yells at them to "get back to work!"

Rad sits behind the counter and naps. A customer approaches him about using a coupon on a different production. Rad quickly dismisses the customer until another customer asks him about getting different bananas. Rad sees another customer but horribly disfigured and tosses him. Another customer wants to buy his groceries in pennies. Rad lifts the customer and turns around to see more customers. Enid approaches to the back and prepares to perform Rad's job. Enid gets tired of lifting and placing heavy boxes. Enid sits before she stacks again. When she pushes a button behind her, she is in shock that there are more loads of packages.

Rad enters the break room with Enid and K.O. Enid and Rad both are tired of each other's jobs and realized that their jobs are equally as hard. They both make amends that they are better with their own jobs. K.O. wins the Duck Stack! game.

"The Life of Darrell"

"Where In The World Is Mr. Gar" 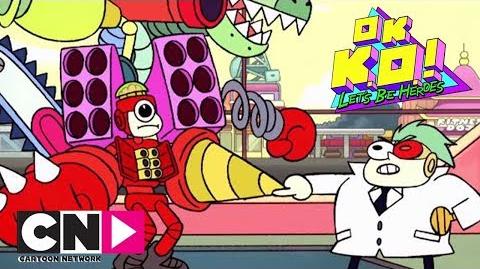