When Rad throws his own prom at the Plaza, K.O. tries to make sure it goes off without a hitch.[1]

The episode starts with Radicles putting up a poster for the Plaza Prom. When K.O. asks him what he's doing, he explains that he is hosting a prom tonight at the plaza. However, one of the big reasons why is because he wants to impress Drupe. He then assigns K.O. to be his co-host and tells him to start putting up fliers.

When A Real Magic Skeleton and Brandon see the posters, they decide to call their "dates", which is implied that they don't have.

While K.O. is putting up fliers, he bumps into Carol, and she notices that they're having a prom. When she asks K.O. who he's bringing, he decides to invite Carol to be his date. While Carol is looking for chaperones (with Crinkly Wrinkly trying to get her attention), she sees Mr. Gar and tells him he's going to prom.

Meanwhile, Rad is trying to convince Red Action and her crew to come to the party, to which they respond "maybe". K.O. comes in and Rad tells him to get Enid and meet up at his van in ten minutes.

When Enid arrives (twenty minutes late), Rad gives K.O. the "party scroll", which he recieved from his friend, Brad. Rad insists that if they follow the rules in the scroll exactly, the prom will be a success. He begs Enid (aka DJ Fireball) to play mainstream music instead of the music she wants to play. She agrees, and they start setting up.

At the prom, K.O. is serving food and drinks, Rad is allowing people in, and Enid is DJing. While K.O. is serving cheese, he sees A Real Magical Skeleton and Brandon in a heated argument with each other. Earlier that day, they both lied that they had dates, and neither of them had showed up yet. K.O. finds his mom and compliments her, while Mr. Gar walks up to her when K.O. leaves and starts failing to engage in a conversation with Carol (while saying "Hello Carol, how are you doing?").

When Red Action's crew comes, they are disappointed by Rad's prom and decide to stand away from the party. Rad lies down, in failure, while K.O. sees that the party is starting to fall apart. He tries to find a way to fix it with the scroll. Raymond arrives and is about to attack, before he realizes that the prom is already falling apart. K.O. convinces Rad that the scroll isn't working, starts a dance battle between Rad and Raymond, while allowing Enid to play her music.

Rad and Raymond start to dance. Rad being the victor and Raymond is sent off into space. Everyone picks Rad up and Drupe compliments his dancing, before they start dancing. A Real Magic Skeleton and Brandon apologize to each other, and everyone is dancing. Enid jumps out of her DJ station and starts dancing with K.O.

The episode ends with a series of photos. One is a picture of K.O. and Enid dancing, another is Rad and Drupe taking a selfie, Carol dancing, K.O. jumping in, and Mr. Gar awkwardly standing in the background, Crinkly Wrinkly breakdancing, another is Colewort and Potato together, then a picture with K.O., Rad and Enid all together. 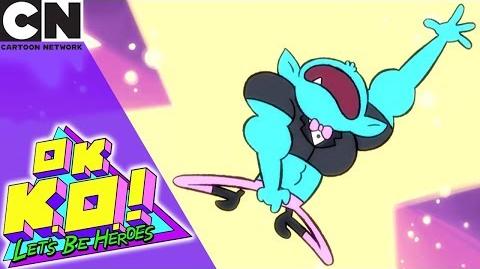 Retrieved from "https://ok-ko.fandom.com/wiki/Plaza_Prom?oldid=131147"
Community content is available under CC-BY-SA unless otherwise noted.