It is Parents Day at Lakewood Plaza Turbo. K.O.'s and Rad's parents are there but Enid's parents are not. Enid says that her parents are doing ninja things in their ninja clan then disappears in the floor of the plaza. K.O. and Rad, curious, decide to bring Parents Day to Enid by following her to her house. Rad tells K.O. that Enid has a lot of secrets, one of them being that her favorite color is purple. When they finally get to Enid's house, a haunted mansion, they see that Enid is really a witch! They also see that her father, Bernard is a werewolf and her mother, Wilhamena is a vampire. Enid spots them and tries to make them go away. But before she can, her mother notices Rad and K.O.

Wilhamena invites them in for dinner. Rad asks her all sorts of questions, much to Enid's dismay and annoyance. While eating, Enid's parents show Rad and K.O. a photo album full of embarrassing picture of Enid. When K.O. reveals that Enid is a ninja, her parents express concern, as ninjas are "not spooky". As Rad and K.O. are entertained, the two ghosts in the basement, Spanky and Crudde, think that they're laughing at their "spooky style". They decide to go up to Rad and K.O. and possess them. Rad starts dancing all over the table. Then K.O. and Wihamena and Bernard start dancing on the table. Enid's younger brothers tell them that K.O. and Rad have been possessed.

K.O. and Rad, possessed by the ghosts, fly off into their car but while trying to escape, Bernard picks up the car and they fly away. Wilhamena turns into a bat, takes off her two younger children's heads, and chucks them at the two ghosts, but misses. Enid uses ninja techniques to summon a tornado that grabs Rad and K.O. and shakes the ghosts out of their bodies. Wilhamena sucks up the ghosts' souls before they have a chance to escape and shoots them back into the basement where they lie in bed. She and Bernard are now proud of their daughter's ninja skills and tell her so.

K.O. tells Enid that her secret is safe with him (her favorite color) and runs off giggling. Rad and Enid sit on the step of her parent's porch. Enid asks why he had to laugh so much and embarrass her. Rad says he wasn't laughing at her- he was laughing at how much he can relate to her being embarrassed by her parents, because he's embarrassed by his too. Enid laughs and thanks Rad and tells them that they should come over sometime. When she invites them. 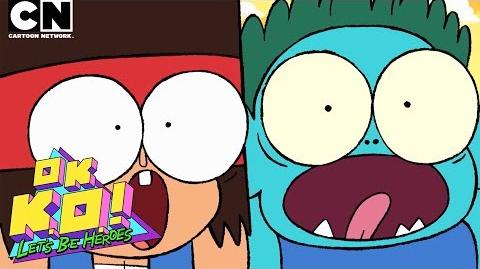