OK K.O.! Let's Be Heroes is a superhero comedy animated series created by Ian Jones-Quartey for Cartoon Network. It is based on the original pilot "Lakewood Plaza Turbo", originally released May 21, 2013 for Cartoon Network's 2013 Summer Shorts project. The series was originally thought be to not picked up due to its lack of information over the past three years since the pilot's debut, aside from some slight hints and sketches of the cartoon. It turns out that the show was picked up earlier and Ian Jones-Quartey needed time to develop the series before it was formally greenlit by Cartoon Network.

On February 4, 2016, a mobile game for Android and iOS was created and the web series had premiered on Cartoon Network's YouTube channel[2] and the CN App.[3]

On December 2017, the second season was confirmed to be released.[5]

On June 2019, the third season was renewed. On August 6, 2019, in an interview with Den of Geek!, Ian Jones-Quartey has stated that season 3 is the final season and will be airing the series finale in 2019.[6] It was further revealed that Cartoon Network did not renew the show after Season 3 and it was not Ian's choice to end the show, but gave the show crew an opportunity to make a planned ending.[7]

On September 6, 2019, the series concluded with an hour event with the final three episodes: "Dendy's Video Channel", "Let's Fight to the End", and "Thank You for Watching the Show".

Starting on June 7, 2019, online releases of episodes has been opened up to be streamed on Hulu + Live TV than just limited to the Cartoon Network app.

While working as a storyboard artist on Steven Universe, Ian came up with an idea for a pitch called "Infinite Guy Generator", where a kid would summon different "guys" every episode to fight the villain's evil guys. When creating the pilot, Ian created a world based on that original idea.

Later, while working as a co-executive producer still on Steven Universe, he used that same idea for a guys generator, that appeared in one episode, which had good reception, coming back later in the second episode of that show.

While developing the OK K.O. mobile game and series, Ian eventually expanded the concept of "guys" to include "gals" and "pals" in this universe. Ian even considered renaming the show "G.U.Y.S. G.A.L.S. and P.A.L.S", but thought it was too long for a title. [8]

While the show was in development, it was under a different name, "Mini Maulers". Dendy was originally an elf before changed into a kappa. It was later changed due to a Cartoon Network show existing at the time with the "MM" initials, likely referring to Mighty Magiswords.[9]

OK K.O.! Let's Be Heroes is set in the year 201X. A boy named K.O. aims to become the greatest hero as he works at Gar's Bodega, a hero supply shop located in Lakewood Plaza Turbo owned by Mr. Gar, a serious, dedicated manager. Alongside K.O. are his best friends and co-workers, Enid, a relaxed responsible ninja and Radicles, a narcissistic alien slacker. K.O. takes on adventures with his best friend and classmate Dendy and battles for the plaza against Lord Boxman's robots.

There had been rumors and speculations that OK K.O.! Let's Be Heroes was canceled by ratings or among other reasons, however, that was not the case.[23] On February 17, 2021, in an interview with the Cartoon Crash Course podcast with Nico Colaleo, Ian Jones-Quartey explained that the show was originally supposed to be one of the first shows to be a streaming exclusive from a streaming service AT&T and WarnerMedia planned to launch earlier, which is now known as HBO Max. It would have been an HBO Max original from the start to rely on streaming views instead of traditional T.V. ratings. However, the anti-trust regulation got the AT&T merger, therefore HBO Max, heavily delayed. This show got affected by the merger's delay which caused the show's third season to be the last season and to be reduced from forty episodes to twenty episodes due to not increasing the budget. The show crew was expecting the third season to have forty episodes before they were notified from the network on Spring 2018. Other shows had been affected by the process as well.[24] Although, this show was one of the first to stream episodes on the Cartoon Network app before airing episodes on T.V.

Ian Jones-Quartey stated that all of the story arc plots have been placed into the episodes as they originally planned it as they wanted "way more stand-alone side-character development stories, fun one-off episodes, ridiculous flights of fancy, crossovers, and flashbacks".[25] It was revealed that there were more episodes planned out if the show continued long.

On May 3, 2021, a Twitter user asked Ian Jones-Quartey on Twitter if there was a possibility of a comic book series. He answered that at one point, he really wanted to make one with OniPress or IDW. The idea was that every issue would have untold short stories starring the side characters of the main show in a format that is similar to shonen magna magazines. It would have featured different logos and art styles for every hero with continuing stories that changes every month. For example, a Hue Troop action cover story and a Potato & Colewort gag strip as a backup. K.O. would always be on the cover. However, the ideas for a comic book series were scrapped because Cartoon Network were not invested.[26] 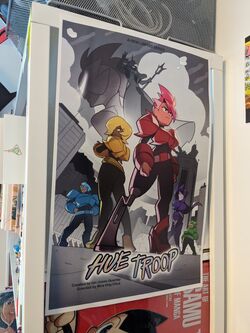 On May 16, 2021, Ian Jones-Quartey revealed that there were a couple of ideas for a spinoff series. One in particular he wanted to do was an anime spinoff starring Red Action and the Hue Troop. He posted a poster for the limited spin-off series. It would have been directed by Mira Ong Chua. They were close in the making of the spinoff series until Cartoon Network scrapped the idea.[27]

On December 17, 2020, a Twitter user asked Ian Jones-Quartey on Twitter if there is a possibility that an artbook could be made. Ian responded that there is sufficient material that can be added for an artbook, however, he stated that there needs to be a publisher, an author, and demand for the artbook to be made.[28]