OK K.O.! Wiki
Register
Don't have an account?
Sign In
Advertisement
in: Level 2 Canon, Media, A to Z,
and 2 more

It is an action-packed brawler beat 'em up game, and was released for iOS & Android on February 4, 2016.

It has been taken off the App Store in 2020 and can no longer be downloaded, alongside any other OK K.O. focused app games. People who have previously downloaded the app can continue to play and re-download it indefinitely at no extra charge.

Become a hero with K.O. and use super radical moves to battle the evil Lord Boxman in OK, K.O.! Lakewood Plaza Turbo!

DEFEAT LORD BOXMAN (IF YOU CAN)
Lord Boxman will do anything to destroy Lakewood Plaza. But you can't let that happen! Learn new fighting moves, unlock special attacks and use powerful items to stop his army of evil robots. Become the hero you always knew you could be, and send that bum packing!

MEET AWESOME DUDES AND DUDETTES
Get to know all the dynamic denizens of Lakewood Plaza! Hang out with coworkers Radicles and Enid. Help your boisterous boss, Mr. Gar, rebuild the Plaza. Learn incredible new fighting techniques from your mom, Carol. Help out other crazy characters like Ted Viking, Brandon, Red Action, A Real Magic Skeleton and lots more!

EXPLORE A VAST NEW WORLD
Look for hidden secrets and battle a whole mess of bad guys as you adventure throughout Lakewood Plaza and the surrounding lands.

Use power punches, killer kicks and stunning super moves to save the Plaza in OK, K.O.! LAKEWOOD PLAZA TURBO!

A mysterious package is sent to Gar's Bodega. The package reads "Hero Tonic" on it, but Mr. Gar claims that he didn't order it. K.O. wants to use it to get strong as it is his life dream, but he can't since the tonic has traces of peanuts and mega peanuts (K.O.'s allergy), much to his dismay. Mr. Gar tries to cheer him up, by saying that it "probably isn't that good". Enid and Radicles drink it and decides that it's so good that they need to have a taste party. Mr. Gar says that no one will come to the "taste party", saying that the name sounds really obscene. Everyone, including Carol, A Real Magic Skeleton, Red Action, Ted Viking and Foxy, Beardo, Brandon, Mr. Logic, and Mega Football Baby come for the taste party.

However, the Hero Tonic turns everyone evil. Mr. Gar blows up the entire Plaza to keep the new villains from teaming up and destroying it themselves. The explosion sends everyone to different parts of the plaza. It is now up to K.O. to save everyone and bring an end to this evil. 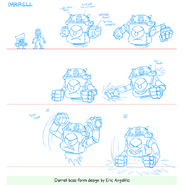