When K.O. realizes Pow Cards exclude his friend, he's at a loss of what to do.[1]

K.O. is hanging out with Dendy and go about discussing their favorite shared hobby of collecting Pow Cards. However, when K.O. reaches the subject of owning his own Pow Card, Dendy states that she herself cannot have one, as she is a Kappa, which is identified as evil in the town's eyes.

Upset by this, both attempt to destroy their Pow Cards in a volcano for such discrimination, but can't bring themselves to do it, as it holds too much of a meaning to their friendship as a whole. So, as a change of plan, they visit the Pow Cards Industry to try and change the Kappa discrimination.

However, upon splitting from the tour group, they are ambushed by a golden statue robot of the founder. K.O. finds himself cornered, but Dendy comes to his rescue, sending an electric pulse through the robot, shorting it out. They press on to the secret room, where they learn how the Pow Cards are manufactured. Just when Dendy is about to activate her custom-made override code, they are captured by two guards, who heard the commotion and viewed the scrap with the robot on the security cameras.

However, Mr. Cardsley steps in and assumes the two are lost. K.O. disregards this and confronts Mr. Cardsley on not including Kappas in Pow Cards. He replies that Kappas like Dendy should not be rewarded for supposedly drowning people, but K.O. strongly defends her, saying that she's done several great things. When K.O. asks if he's ever known a Kappa before, Mr. Cardsley avoids this subject by ordering the guards to capture the two friends. Once more, Dendy steps in and tells Mr. Cardsley that Kappas could not be heroes because they had none of their own to look up to. She then requests to then hack into the system and see what Kappa heroes come up. Mr. Cardsley reluctantly agrees, and Dendy works her magic on the main computer. At first, no Kappas show up on the main screen. Then, just as Mr. Cardsley claims that he was correct, thousands of Kappa heroes show up, and their Pow Cards come out by the second. The funds increase abruptly, sending the whole party out of the control room on a wave of gold. Mr. Cardsley admits defeat and decides to manufacture Kappa Pow Cards. KO then gives Dendy her own Pow Card, which is a Lvl 1, ending the episode on an uplifting note. 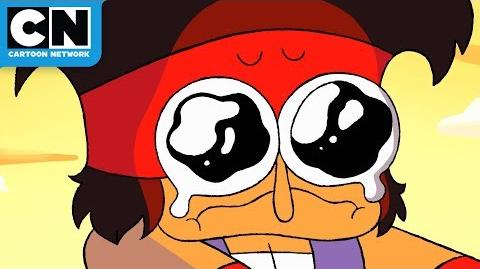 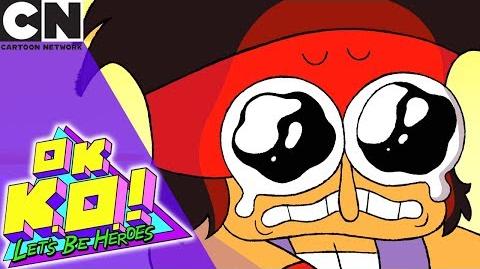