OK K.O.! Wiki
Register
Don't have an account?
Sign In
Advertisement
in: A to Z, Objects, Food and Beverages

This is a list of all minor objects that have appeared, but hold no significant nor recurring role. 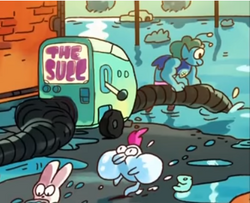 The Succ is a vacuum-like machine that was wielded by Rad, along with A Real Magic Skeleton and Brandon, in order to drain the water from the plaza in "The Power Is Yours!". The Succ is a small, green device with purple lettering spelling out "THE SUCC". It's a simple machine with only 2 wheels and an on/off lever. It has 2 tubes protruding out of either side to help with the transportation of liquids. It sucks up liquid and releases it into another area. The Succ is named after a popular meme.

A Soda is a drink seen on the floor of Rad’s house in "Plaza Alone" when K.O. visits Rad and Enid and sees them watching sad documentaries. It is a orange can with a red lightning symbol.

The Chips were also introduced in "Plaza Alone" the same way as the Soda. They highly resemble a bag of Dorito’s without a logo.