OK K.O.! Wiki
Register
Don't have an account?
Sign In
Advertisement
in: A to Z, Characters, Secondary characters

His attack is Kamikaze sting that will destroy any enemy, but only use it once. His weakness is that he is easily distracted by bright colors, pretty flowers, or open drink cans. He has a pet pickle named Bumpy.[1]

K.O. and Dendy's Classmates are the classmates of K.O. at Original County Public School. Five of them are officially named as Nanini, Genesis, Bobo, Gecky, and Michu. They've made a flashback appearance in "I Am Dendy" with their debut appearance of "Mystery Science Fair 201X" and "The So-Bad-ical". Another classmate is revealed to be Clown Kid and only appeared in "You're a Good Friend, KO".[2]

Brandon's parents bear resemblance to the Hanna-Barbera characters Yogi Bear and Cindy Bear. Their only appearance is in "Parents Day".

They are all animals that wish to be humans and wear human-like clothing and disguises to fit in. Their only appearance was in "We've Got Fleas". 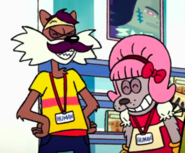 Blue Guy in a Tie

He wears a small yellow tie while the rest of his body is light blue. His only appearance was in "Plaza Prom".

He is a small light purple cat who appears in the crowd at the plaza prom in "Plaza Prom". 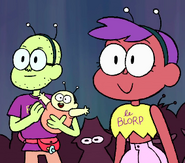 Two crew members who work with The Director. One of the cast crew members have lines, while the other doesn't. The Cast Crew has unknown names. They only appeared in "Everybody Likes Rad?".

People who came to Gnarlio's party at the bodega. They've only appeared in "We've Got Pests". Two party people were credited as "Frat Boi".

The mother of Puck Reverie and the sister of Bernard only appeared in "Parents Day" albeit in a family photo. She is described as a lady wolf-man, and was previously married to an angel. Her fur is purple, much like her brother's.

Grandson of the former villain Succulentus. He only appeared in "Know Your Mom" and "Super Black Friday", and is credited as Kid. He is voiced by Kari Wahlgren.

He fought against Silver Spark once. He only appeared in "Know Your Mom".

Villain imagined by K.O. when he wanted to find Carol a new super villain to battle. He only appeared in "Know Your Mom".

Prostratum is a former member of the Kaktus Krew who is mentioned by K.O. in the episode, "Know Your Mom". The way the scene plays out when K.O. tries to call Prostratum, it seems as if they passed away.

Geoffrey is Elodie's driver who only appears off-screen in "You Have to Care". He is voiced by Cole Sanchez.

Doctor Weakpoint is the villain who created Steamborg. The character is first mentioned by Silver Spark in "Glory Days". All other information about them is unknown other than was he was classic-P.O.I.N.T's most regular recurring villain.[4]

A Giant Borg is a minor character in OK K.O.! Let's Be Heroes. This character first appeared in "Red Action to the Future". It is silver and diamond colored, and is big like Chameleon Sr. Its abilities and powers are laser beams and force field. It can shoot lasers out of its eyes and it can protect itself from its opponents' attacks, it also makes a cameo in a background of Thank you for watching the show.

Stretchworth first appeared in a Pow Card and mentioned in the episode "Just Be a Pebble". He is a stretchy white creature hero, who has a blue spandex outfit with a lighter blue cape. According to K.O., Stretchworth is seven feet tall.

Gargantuon first appeared in a Pow Card and mentioned in the episode "Just Be a Pebble". He is a buff, light purple creature in golden armor, with a red triangle on his chest, and red gloves with a black cape. He is a hero. According to K.O., Gargantuon is ten feet tall. 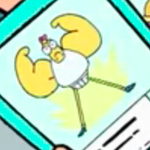 Mega Hugeman first appeared on a Pow Card and mentioned in the episode "Just Be a Pebble". He is a yellow, buff-armed humanoid with long, slim legs and short red hair. He wears a white tank top, white underwear, dark blue shoes, and short socks. His hero level is eleven. According to K.O., Mega Hugeman is 5' 10".

Stickman was a guest hero character in "Crossover Nexus", originally appearing in storyboards of the 22-minute version of the episode but was scrapped when the episode was cut down to 11 minutes. Stickman has the normal build of a normal stickman, but with two muscular arms, and a small yellow cape. He has no face and his body is colored red. Due to only appearing in storyboards in "Crossover Nexus", his personality is currently unknown. However, he is seen to be friendly and sportsman-like, calling K.O, Garnet, Ben, and Raven a 'pretty creative team' with a heroic voice, as shown by his dialog box.

Abuela Garcia was the owner of Abeula Garcia's Bodega. She is the grandmother of Mr. Gar and Sister Gar. She first appeared in a picture in "Thank You for Watching the Show".

Mecha-Shark was created by Dendy.[5]