OK K.O.! Wiki
Register
Don't have an account?
Sign In
Advertisement
in: A to Z, Music, Songs, Merchandise

"Let's Watch the Show" is the name of the theme song that opens into every episode of OK K.O.! Let's Be Heroes. It was first shown on Cartoon Network's YouTube page on March 9, 2017.

An extended version of the theme song was played in the "Let's Do It Together!" music video which chronicles the evolution of the OK K.O.! franchise. On September 5, 2019, the extended song has lyrics and is available to listen on Spotify, iTunes, Google Play, and YouTube Music.[1]

A disco ball shifts and transforms into planet Earth and the camera zooms into Route 175 where there's a fight between K.O., Enid, Radicles, Carol, Mr. Gar against Lord Boxman and his henchman. Lord Boxman is on his flying desk and Darrell is controlling his large counterpart. It pans out and pans in to K.O.'s and Lord Boxman's heads clashing. The logo appears in front of the explosion. Then it transitions to each heroes poses with their names placed somewhere in the frames. Goes from K.O., Enid, Rad, Carol, and then Mr. Gar. When Lord Boxman's name comes, Lord Boxman's hand reaches out making the name to go away and points to his henchman to fight them. The heroes and villains fight each other. Explosions and Darrell's laser shoots out. The Earth gets blown up by K.O. punching through along with the words "Created by Ian Jones-Quartey" and the letters O and K for OK KO are at the corners. 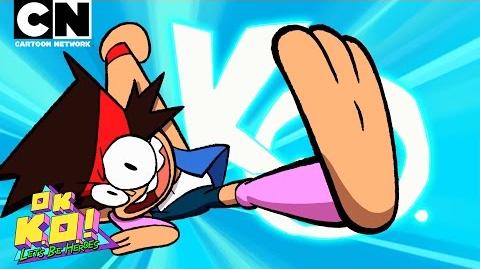