Let's Not Be Skeletons

Let's Not Be Skeletons

When a charismatic huckster shows up to the plaza, the product he's selling turns everything upside down.[1]

First, K.O., Rad and Enid are unloading crates from a truck at the Bodega while Mr. Gar takes inventory. Suddenly, a vehicle crashes into the truck, setting it ablaze. Mr. Gar, naturally, is furious, as a dark purple dog exits the vehicle carrying an amp.

As Mr. Gar yells at the dog, Bo, a rotund man exits the vehicle and introduces himself as "Gil Ferris, Problem-Solver!" As Mr. Gar explains that the plaza has a "no solicitors" policy, Gil simply explains that he is here to help give the customers of the Plaza an edge to defend themselves against the onslaught of villainous activity--in the form of an little device called a "Skeleton Remote", which apparently transforms its intended target into a powerless skeleton. As he spreads the word through an enthusiastic musical number (with a Gospel-esque choir), Skeleton Remote-Mania spreads throughout the plaza like wildfire, though only K.O. remains wary of the device.

As Enid gleefully uses her Skeleton Remote to zap various objects, K.O. explains that he thinks it's a bad idea to give this much power to people. His fears are soon confirmed when Rad and Enid zap each other into powerless skeletons, yet they aren't all that concerned about their change, saying that "the Skeleton Remote is our power now". K.O. panics and heads off to find an antidote, while Rad and Enid decide to take a "half-day".

K.O. tries to go to Mr. Gar for help, but he's too busy using his skeleton remote to zap practice dummies of Lord Boxman with earmuffs on. K.O. then encounters Neil, and asks him for help, but to no avail, as Neil has basically become addicted to the power of the Remote as he goes around zapping people out of paranoia. Panicked, K.O. hears familiar cheering, and turns around only to see that Dendy is also a victim of the Skeleton Remote.

K.O. goes to Gil Ferris for help, only to discover that the Skeleton Remote's effects are permanent and that he's selling Skeleton Remotes to Boxmore robots. The skeleton-ized people then get mad about this, only for Ferris to charm them by selling them "Triple-Pronged Skeleton Remotes", and K.O. realizes that Ferris is purposely causing problems in order to sell his merchandise. This eventually results in a free-for-all Skeleton Remote fight, with people and robots zapping one another left and right. Gathering his resolve, K.O. decides there's only one thing to do now.

At Carol's dojo, K.O. cries to his mother and explains the situation. Carol tells him that he'll find a way to put a stop to all this craziness, adding, "What's the worse that could happen from trying?" But before she could finish her next sentence, Carol also gets zapped.

A little while later, K.O. steps onto Gil's stage, and with Bo's help on keyboard and rope work, sings a heartfelt song about exercising restraint on using a Skeleton Remote. Unfortunately, the people are not willing to listen, and proceed to chase after K.O. in a fit of rage.

Eventually, K.O. finds himself cornered in Gar's Bodega by Neil and Mr. Gar. However, when Neil gets hit in the head with a can, drops his remote, K.O. quickly grabs it. Mr. Gar urges K.O. to not do anything they might regret, but K.O. responds with, "Isn't it already too late for that?" The two of them are at a standstill, until finally, K.O. reluctantly presses his remote and shoots awake in bed.

It was all just a dream. K.O. tells Carol about the dream from start to finish, and goes on to say that a terrible power like that shouldn't be in the hands of the people. Carol then tells K.O. that if he is worried about the well-being of the fellow citizens, then he should call the local congressperson.

Meanwhile, at the Congress Woman's office, Gil Ferris is in the process of getting a permit for his Skeleton Remotes, until the phone rings. Congress Woman answers it (it's most likely K.O. and Carol), and after the call ends, she proceeds to tear up the permit and officially makes Skeleton Remotes illegal. Gil tries to sway her with another of his musical numbers, but she kicks him out "before she decides to make musical numbers illegal". She returns to relax in her office. 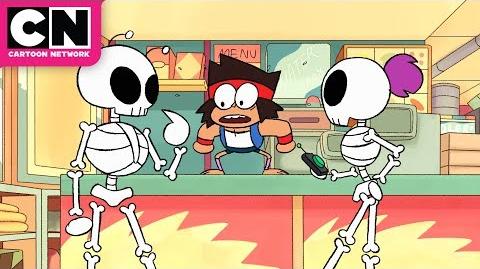 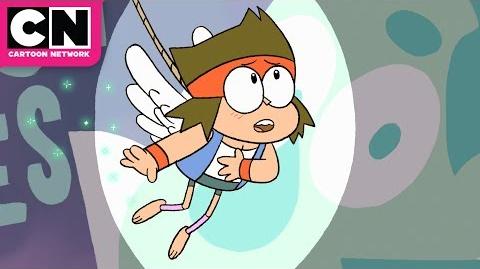 OK K.O.! Skeletons are Stronger Than You Cartoon Network