OK K.O.! Wiki
Register
Don't have an account?
Sign In
Advertisement
in: A to Z, Episodes, Media
English

"Lakewood Plaza Turbo" is the pilot episode of OK K.O.! Let's Be Heroes, created by Ian Jones-Quartey as a pitch to Cartoon Network on May 21, 2013. The short is the first appearance of K.O., Radicles, Enid, and others.

Someone has written graffiti on the plaza's sign, and it is up to a recent newcomer named K.O. to find out who did it.

Naive K.O. comes of age, develops his burgeoning powers and works his first job in a Street Fighter-inspired world.[1]

Naive K.O. comes of age, develops his burgeoning powers and works his first job in a video game-inspired world.[1]

In the year 201X, KO is informed by Enid that Mr. Gar wants his employees to get rid of a freezer. KO lifts it, dumps it on a sleeping Radicles, and throws it into the dumpster while still inside the store. Enid complains that KO made another hole in the ceiling. Radicles becomes angry and calls KO a show-off. KO compares Radicles to a baby lamb, and Radicles takes this as an insult. The crowd is thrilled by KO's abilities as Radicles seems to be no match for him. However, the tide turns as Radicles showcases his special move, the power poke, which pushes KO against the wall. KO attempts a special move of his own, but fails, and everyone but Enid laughs at him.

The trio hears Mr. Gar scream, and rush to see that their boss's sign now reads "Lakewood Plaza Turbo Smells Ba" with "Smells Ba" written in spray paint. Mr. Gar explains to KO that Lakewood Plaza Turbo, which sells goods to heroes, has a competitor called Boxmore just across Route 175 that sells weapons to villains. Mr. Gar calls on KO, who responds, Enid, who responds, and Radicles, who is busy texting. A curious and angry Mr. Gar reads that text to find out that Radicles just wanted to tell KO that he thought the boss was "really cool".

Mr. Gar gets in his car to get a power washer, and tells the trio to find "the Graffiti Weiner", but Radicles informs KO and Enid that it's 3:45, and he can take a break and flies away, and KO chases after him. Enid tells Mr. Gar that they never listen, and Mr. Gar tells her to make them listen.

A shadowy figure hides behind a van, while KO and Radicles talk about their mission on the other side. The figure rolls some Boxmore Spray Paint under the van, and Radicles picks it up. KO tries to challenge him to a Power Battle, but is cut off by Enid, who tries to calm him down. KO tries to attack Radicles, but is blasted away by Radicles's special move.

KO crash lands in his mom's dojo "Fitness Emotions", where he is gently attacked by his mom's customers. KO then gets advice from Carol that he shouldn't call a "Power Battle" on someone he knows and trusts.

KO then goes outside and calls a "Power Battle". He says he's pointing to his enemy, who everyone assumes is Radicles; however, when KO finally manages to use his special move, he fires at the shadowy figure from before, who turns out to be Darrell, a Boxmore employee.

Darrell tries to get away on a slow-moving scooter, but Enid launches KO at him, and Mr. Gar arrives. Mr. Gar offers Darrell to fix the damages, but Darrell insults Lakewood Plaza Turbo by calling it "smells bad". Mr. Gar pounds Darrell into the asphalt. 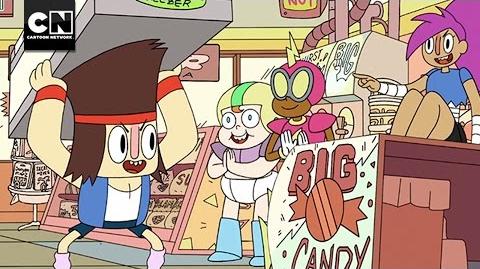