K.O. learns the story of how Mr. Logic came to the plaza.[1]

Carol and K.O. enter Logic Cuts for a haircut. Mr. Logic prepares with the necessary tools for the haircut, until K.O. notices that he is a robot. K.O. is surprised that he is good due to other robots. Mr. Logic tells K.O. of the time when he was created.

Lad Boxman created Mr. Logic so he could help in creating evil ideas. Lad Boxman tells Mr. Logic about his plan to send P.O.I.N.T. a cake with Evil robots, Mr. Logic recommends that Lad Boxman develops a business that creates robots because that is what would help his idea improve and do more against heroes, Lad Boxman approves the idea. The two then create Boxmore and manufacture the Junk Fish. Mr. Logic informs Lad that the Junkfish are selling well, only for Lad to be disturbed by a man who is developing a shop for heroes. Mr. Logic believes that the development of the new store will be their benefit by bringing in more heroes more villains will be manufactured as a result. Boxman cannot ignore the placement of the store, so Mr. Logic recommends that the store is destroyed. Lad fires Junkfish at the store only for the man to repel the fish. Lad decides to redevelop a better model for the Junkfish, while Mr. Logic informs him that will be a bad decision due to the current standards of Boxmore not meeting the requirements for the idea to work for long. Boxman goes against Logic's word and believes that Logic needs to see the world like he does.

Outside Logic talks to the man, he speaks gibberish but removes hair that was in the way to reveal that he is Mr. Gar. With that Mr. Logic recommends giving Mr. Gar a haircut for better communication, which he approves. Logic gives a haircut, afterward Gar able to communicate reveals that he is making a store that will serve to create, which makes Mr. Gar ask Logic how did it feel for him when he created a good haircut, which made Logic feel good in connection to how Gar feels about creating. Gar returns to work and Crinkly Wrinkly tells Logic that the store will be a place that he plans to make purchases in the future, with K.O. being surprised that Crinkly Wrinkly was there.

Mr. Logic returns to Boxmore, Boxman shows the newer edition of Junkfish, but due to newer circumstances, Logic does not want him to use it, as he believes that it is better to create than to destroy. Due to their differences Logic departs from Boxmore, and Boxman decides to send the Junkfish to destroy.

Outside Mr. Gar is eating a sandwich, only to discover a trail which the Junkfish lured him with to attack, then it attacks him only for Logic to cut a cord of the Junkfish which stopped it and released Gar, he then destroys it. Upon noticing the save, Mr. Gar gives Mr. Logic a chance to open a barber shop, in which Logic accepts. Boxman then unveils the newest robots he created who he believes will be much more loyal to him. After their reveal, they start to show affection towards their father. Lad Boxman say that "I'll never regret this."

Back in the current day, K.O. realizes that Logic's story wasn't funny, only for Logic to point out that without that event occurring, he himself wouldn't be giving K.O. the haircut which Logic believes is funny. K.O. points out that Mr. Logic is a true good doer, which Mr. Logic feels thankful for. Mr. Logic then gives K.O. the haircut, which Mr. Gar likes and K.O. thanks Logic for it. 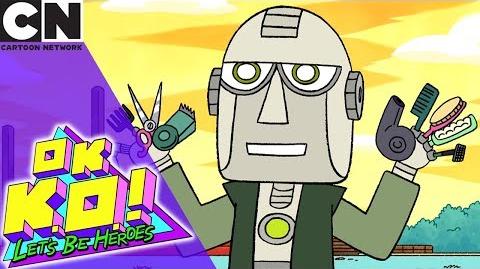