Carol is watching television, so she asks if K.O. had already done his homework. He tells her that he's working on it and she asks him to open his mouth, where inside he had a robot eye.

He said he had to do a job on teamwork and said he could use it to show where his mother worked previously: A heroine in P.O.I.N.T. Carol says he did not need that, because he was with Silverspark herself. She begins to tell the story of the first day she became a member of P.O.I.N.T., at the base, she shows how excited she is by tidying up her locker.

El-bow (Mr. Gar) was worried about something. She warns him that those cabinets were his trademarks as members and asked if he wanted to customize his, he says that all he wanted was to survive one more day there. She says that he would go with his "boys", his elbows. K.O. is surprised by Carol saying that Mr. Gar was so nervous, Carol says that for her he continues the same way.

Returning to the flashback, she says that she studied all superhero moves to be there with him and another member named Rippy Roo. She picks up her sticker box and tells him to pick one. He chooses Foxtail and she presumptuously thinks he has a love interest in her saying she was his "favor".

He says she chose him to be part of the Junior members when she saw him fighting in a ring. She encourages him by saying that he was a big deal.

After that, Lazerblast arrives. Silverspark gets immensely nervous and quickly closes her closet full of photos of him. He says he is there to warn them that they will soon be decorated. They follow and officially become Junior members. They hug each other in a group, when the alarm rings, they try to go together, but Lazerblast says that it was not yet the time for Junior members to participate in the missions.

As he picks up the mop to wipe the floor, Rippy Roo stops him and uses a device that cleans the floor alone. Silverspark suggests that they should show each other their power moves. El-bow gets a bit nervous at first, but does so. She repeats his moves, because that was really her power: To be able to reproduce power moves of both heroes and villains.

Suddenly, a giant robot appears claiming to destroy P.O.I.N.T., Silverspark says that was the chance to show they were capable. El-bow says they were just junior members and did not know what to do. They hide and he starts to get hysterical. After he calms down and gets encouraged, together they beat the giant robot, just in time when the other members of P.O.I.N.T. arrived, and they congratulate them for their courage.

Laserblast begins to get closer to Silverspark, Doctor Greyman says he would get pizza. He calls her to go with him, she goes along and K.O. tells his entire class the great story of teamwork with his mother's old colleagues, and he himself announces the end of the episode. 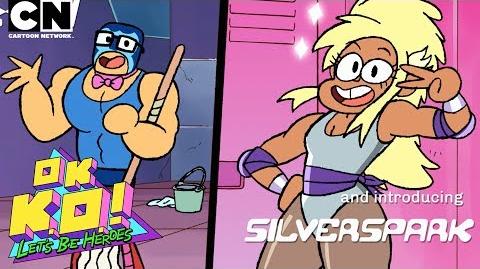 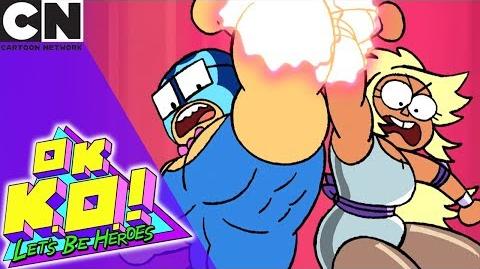