OK K.O.! Wiki
Register
Don't have an account?
Sign In
Advertisement
in: Article stubs, A to Z, Episodes,
and 3 more

"Final Exams" is the 20th episode of Season 2 of OK K.O.! Let's Be Heroes, the 72nd episode overall, the mid-season two finale, and the fifth and final episode in the Point Prep story arc.

Enid wakes up to, as she calls it, a perfect world with perfect K.O., perfect Rad, and perfect Elodie. Enid remembers that Chip Damage is up to something terrible, startling Rad and K.O.. they start the rest of the day with a bunch of POINT troopers scoping out the hallway. After a trooper boxes KO and Rad, Enid tries to help them, only to be stopped by Elodie. When Elodie refuses to help Enid due to it being Final Exams day, Enid must free her friends herself. Enid tries to slip into the elevator that goes up to Chip Damage's office, she is stopped by 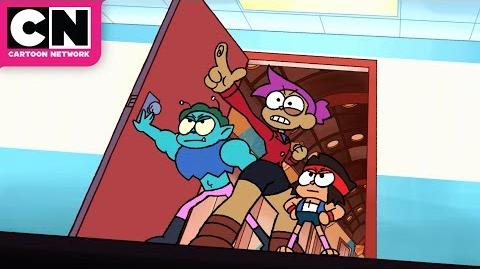