Our heroes play an arcade game that makes them face their greatest fears.[1]

K.O. and Radicles run into the bodega excited about a new game, Face of Fear. They tell Mr. Gar that it changes your fear resistance level if you beat it, so he checks out their new fear resistance levels. Radicles is 10, and K.O.'s is 15. Mr. Gar checks his own to find that it is an 8. He immediately goes to the machine, and challenges it on the maximum level. He immediately becomes incapacitated, which in turn causes Dendy to come over and transfer Radicles subconscious into Mr. Gar's fear. Suddenly, he gets overtaken by fear, and the same happens for Enid. So, K.O. goes in and tries to help all three.

In the next shot, we see him in Enid's fear, or the more self conscious part of her. K.O. then proceeds to reassure all three of her core personality traits that there is nothing to be ashamed of, and enter into Radicles' fear with Enid. While they are in there, they discover that Radicles' fear is none other than being too emotional. And so, Enid and K.O. start to cry, showing Radicles that it is okay to show your feelings sometimes.

Then, the three of them proceed to Mr. Gar's fear. When they arrive, they find Mr. Gar kneeling before a figure named Laserblast, which turns out to be a superhero he used to work with. They get rid of him by releasing K.O.'s fear, an evil version of himself, only to find that Mr. Gar's real fear is Carol, K.O.'s mom. After K.O. gives his mom a hug, they return to the real world. The four of them question Mr. Gar about his fear. He flashbacks to the same scene from "We Messed Up", which seems to hold some significance to the bigger story. 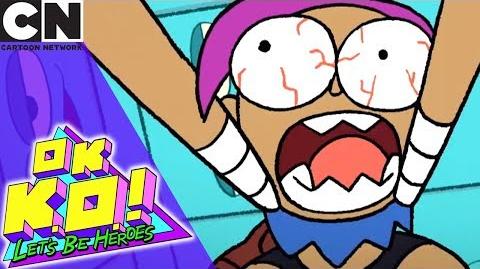