OK K.O.! Wiki
Register
Don't have an account?
Sign In
Advertisement
in: A to Z, Character designers, Show staff,
and 2 more 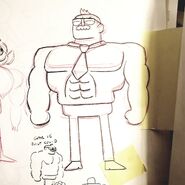