OK K.O.! Wiki
Register
Don't have an account?
Sign In
Advertisement
in: Voice actors, Show staff, A to Z

Christopher Niosi is known for his voice-over work on various anime, some notable examples including Mob Psycho 100, Tales of Zestiria, and Pokémon. He is also the creator of TOME: Terrain of Magical Expertise, an online animated series distributed through websites such as YouTube and Newgrounds.

In July 2019, Chris admitted to being emotionally and sexually abusive to former colleagues, family members and romantic partners. In addition to the news, he also violated a non-disclosure agreement about his role as Byleth in the Fire Emblem series which led the character to be recast in subsequent game releases and updates. 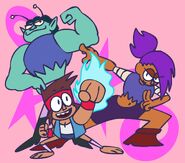