OK K.O.! Wiki
Register
Don't have an account?
Sign In
Advertisement
in: A to Z, Episodes, Season 2, Season 2B

"Boxman Crashes" is the 23rd episode of Season 2 of OK K.O.! Let's Be Heroes and the 75th episode overall.

Lord Boxman crashes at Venomous' lair and inserts himself into his villainous affairs.[1]

On a rainy day, the customers run into the Bodega to purchase umbrellas while K.O. mops the floor. K.O. overhears thunderstorms at DarrellMore and wonders what is Lord Boxman up to, denying that he died. Meanwhile, Professor Venomous demands Congress Woman for one billion technos from the government. Professor Venomous threatens that he has a Doomsday device hooked up to target Congress Woman if she doesn't give in to his demands. Congress Woman transfers the technos to him. Fink plays video games and asks Professor Venomous if he can play with her, to which he denies. 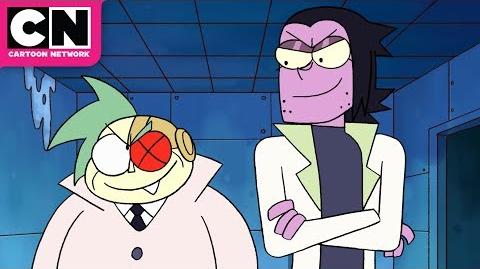