Back in Red Action

Back in Red Action

Enid teams up with Red Action to take on a menace from the future.[1]

Enid scrolls through Red Action's social media feed while working on a slow day at the bodega, perplexed that a "cool" girl from the year 301X would want to hang around the plaza in the year 201X. Red comes in to buy gum and alleges that her friends bailed on her. She offers Enid an invitation to hang out together.

Red Action and Enid go for a cruise through the Danger Zone in Red's Hover Tank. They enjoy their ride until they are confronted by the Hue Troop which appears through a time portal. Blue Power announces that they have traveled to the past to arrest Red.

Red awkwardly dismisses the Hue Troopers as "road performance artists" and blows past them. Hue Troop pursues in their vehicles. Enid and Red find themselves in a pitched road battle until they temporarily elude them. Enid expresses her suspicion that there was something more "personal" to their encounter.

Red discloses her past. She was part of Hue Troop, heroes from 301X that were guided by Renn-Bo through the Prism Crystal that fell to earth in a meteor a long time ago. Red laments that she accidentally broke the crystal and is now on the run from her own team.

Enid is astounded by Red's backstory and tells her how "incredible" she is. Red angrily disagrees. She expresses her frustrations with Hue Troop's rigid life and reveals that she has been following Enid's social media stream. Red discloses that she has long admired Enid for her independence and individuality, that she never "had the nerve" to comment on her feed, and that she always wanted to "hang out with the coolest person in 201X" before getting dragged back to the future.

They are suddenly interrupted by the reappearance of Hue Troop. Red hesitates to confront them but Enid reassures her with a hand to her back and a smile. Red and Enid battle Hue Troop until a meteor suddenly appears in the sky.

Red and Enid realize that this is the same meteor that brought the Prism Crystal. Everyone runs for cover and the meteor impacts. All are blasted off their feet but Red sees the crystal and snatches it.

Red gives the crystal to Hue Troop and reconciles with them. They invite her to rejoin them and return to 301X. Red tells them that it's because of Enid that she came to realize many of her mistakes and that she'll stay in 201X because "it's pretty cool".

Hue Troop returns to the future as Yellow Technique remarks that "Red's changed". Enid and Red carry on with their cruise. 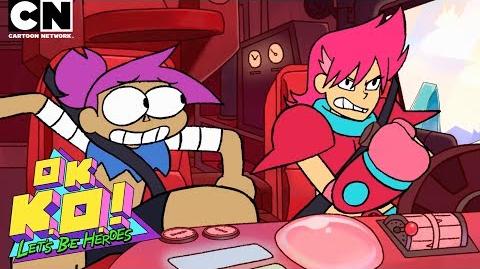