OK K.O.! Wiki
Register
Don't have an account?
Sign In
Advertisement
in: A to Z, Episodes, Season 2, Season 2B

All in the Villainy

All in the Villainy

"All in the Villainy" is the 26th episode of Season 2 of OK K.O.! Let's Be Heroes and the 78th episode overall.

K.O., Rad and Enid are confused to find the villains are more interested in battling each other than them.[1]

Ernesto examines the animosity between Darrell and Fink. They both escalate to fight which makes K.O., Rad, Enid, and the rest of the Boxmore bots confused as to who's fighting who. K.O., Rad, and Enid abandons the fight since Darrell and Fink are preoccupied with theirs. This leads to Lord Boxman and Professor Venomous intervening in their fight. In previous events, Darrell and Fink fight while Professor Venomous orders take out from the Weiner Kabob, and they both fight over a teddy bear while everyone went shopping. Lord Boxman orders Raymond to step out of the car to practice, which he denies. Lord Boxman and Professor Venomous applauds Raymond's, Shannon's, Darrell's, and Fink's performance on stage, to which Fink kicks Darrell off the spotlight.

Professor Venomous orders everyone to attend the conference room to discuss about the difficult transition and to strategize a better minion team-building plan. Lord Boxman and Professor Venomous orders Fink and Darrell to share a room, to which both are dismayed by the decision. Raymond and Shannon help unload Fink's boxes and Shannon attempts to cheer up Darrell by giving him his Sheriff Cowboy Darrell Dad hat. Finks insults Darrell's love of cowboys as she finds them lame. Then, Darrell denigrates about "Lord of the Loot" due to him not going through five minutes without sleeping. Fink feels offended by Darrell's comments, to which she shows off her weapons to Raymond and Shannon from her lunchbox. Fink allows Raymond to check out her plasma mace however, Darrell wanted to check out. Fink blasts Darrell with her laser ray gun since he was not allowed to check out her weapons. Darrell, angered, draws a line that divides the room from his side and Fink's side. Fink and Darrell bickers over the line when Fink steps over to Darrell's side. Shannon scolds K.O. to not get involved after he called her. Shannon records Fink's and Darrell's fight. Darrell accidentally bumps Fink's shelf, causing Sylvia, her second-favorite toy, smashed into the ground.

Having enough with Darrell's rules, Fink blasts a laser through Darrell's cowboy hat. Fink goes back to playing her video game on her first-favorite toy, her computer. Darrell feels dejected that he decides to shoots Fink's computer as retaliation. Lord Boxman and Professor Venomous have second thoughts about their decision after hearing Fink and Darrell fighting upstairs. They both collapse onto the table. Initially, Professor Venomous and Lord Boxman decided to punish the two of them. However, Professor Venomous decides to give them presents, but to not be used at each other and only for attacking the plaza. K.O., Rad, and Enid watches the clouds until they see Darrell and Fink coming to the plaza.

Rad and Enid are disgusted by Darrell's tentacles and covers K.O.'s eyes. He seems them. Fink bites Darrell's tentacle to tell him that Fink will battle K.O. While Fink and Darrell are distracted by bickering at each other, Enid and Rad attacks Darrell. Fink is forced to make a decision to whether attack K.O. or save Darrell from Enid and Rad. Fink launches bombs towards Enid and Rad and saves Darrell. Fink tries to hide this fact. Darrell comments that no one saved him until Fink did and compliments that she's cool. Both of them make amends and call a truce from their earlier actions. Fink and Darrell work together to battle the Bodegamen, but lost. Lord Boxman and Professor Venomous initially believes that the merging was rapid until they are surprised to see Fink and Darrell getting along with each other. Fink and Darrell recreates the possessions they broke as Darrell wears the cowboy hat Fink created and Fink plays the computer Darrell created. Lord Boxman and Professor Venomous are filled with joy to see the outcome of their expectations. In the end, Lord Boxman places his hand on top of Professor Venomous' hand. 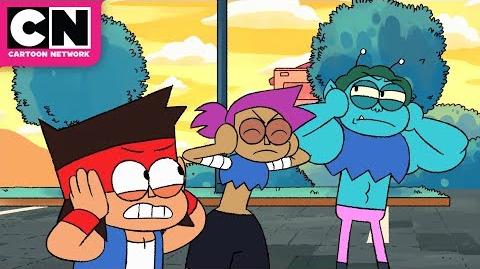